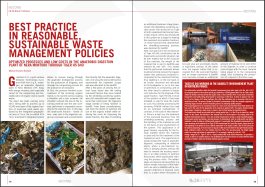 Best practices in the rational management policies and sustainable waste

A Nera Montoro, near Terni, GreenAsm Srl, a joint venture between TerniEnergia S.p.A. and ASM Terni S.p.A., runs an anaerobic digestion plant with energy recovery, and composting and bio-stabilization of waste organic matrix.
The plant has been running since 2012 and can process up to 43,500 tons / year of organic fraction of municipal solid waste arising dall'ATI4 Terni, the vast area of ​​Terni. The integrated system of GreenAsm allows the recovery of energy through the anaerobic biodigestion process for the production of biogas and, through the composting process, the production of fertilizer.
Initially the process included a pre-treatment of the organic matrix input to be made by the coupling between a grinder and a stellar screen: the shredder reduced size of the feed material and the star sieve MADE A separation based on the size of the material. In this way the undersize, the fraction passing 70 mm, was initiated to the digestion stage via a ribbon and a screw conveyor that feed directly to the anaerobic digester, vice versa the screening material represented the difference of the treatment and was destined for the dump.
After a few years of activity, the critical issues that was found was represented by screening material that treated by the tritovagliatura system, it resulted in yet infused with organic material output that could enter the digestion phase instead of being "wasted" in the landfill. From these considerations and the desire to optimize workforce utilization while reducing the fraction of waste disposal costs started the idea to enter a further phase of treatment at the tritovaglio valley. The choice fell on Tiger HS640, a patented machine Cesaro Mac Import, which in this system has been included as being of non-reusable fractions recirculation treatment, or that fraction which in the tritovagliatura valley was destined for landfill.
After one year from the introduction of Tiger HS640 it is possible to draw conclusions experiencing a very positive budget: thanks to the inclusion of this machine in fact the weight of the material being landfilled initiated was reduced by over 50%, what is means that the carried out treatment allows to recover almost entirely the organic that, before remained incorporated in the screening material allowing on the one hand a further recovery of organic matter to be able to allocate to the biodigester or, as in the case of greenAsm, composted, on the other a drastic reduction in disposal costs for the waste fraction.
The Tiger HS640, in most of the systems in which it is installed, is used to treat the matrix as it is therefore working directly FORSU input without the need for an upstream pretreatment. In the case of Nera Montoro there is a dual use: treatment of non-reusable fractions from tritovagliatura and treatment as it is on the basis of any system need.
This is an application of extreme interest especially for the foreign markets where this machine is used solely for the treatment of the material as such. The possibility instead of installing the Tiger in anaerobic digestion plants, composting or selection where there is already a pre-treatment system without the need to delete the existing is an ideal solution to optimize the process significantly reducing management costs.
The advantages are huge because there is a drastic reduction of the weight of the material for the landfill with a consequent reduction in disposal costs that, within a system that is thousands of tons per year, become important figures. At the same time the organic which is recovered from the screening material, and which no longer represents a landfill cost, is transformed instead into an additional quantity of material to start or to the digester, and thus produce more biogas to equal the input material, or composting increasing in this case the production of compost.

The natural gas distribution activities within the Baudelet Environnement group dates back to the 80's but in 2013 the company has opened a unit of methane, in Blaringhem in the Nord-Pas-de-Calais, which has allowed him to develop a new way of treating organic waste so that currently the 100% of such waste are enhanced through this new facility. Dimensioned for the treatment of 15,000 t / year allows to produce from 150 to 170 mc / h of biogas (of which a 55% methane) which, after the purification step, is enhanced in the form of electricity and heat.
The process adopted by Baudelet Environnement exploits the anaerobic digestion for production of biogas and heat and composting for the production of quality compost.
The pressed packagings are conveyed by means of a worm screw and recovered by the wheel loader to be then used for the preparation of the center of the material for the production of RDF. The organic fraction instead, always conveyed by an endless screw is stored in silos for food then the digestion tunnel.
The material used should be pretty solid (with greater than 1) density so that it can be moved with a wheel loader. For this reason the formation of the material that goes to feed the plant is the heart of the Baudelet Environnement process with two essential requirements: have an easily movable / manipulatable organic product and have a very low presence of inert in order to obtain a certificate of quality compost .
To achieve this Baudelet Environnement therefore harnesses the power of Tiger HS640 produced by Cesaro Mac Import, chosen from the beginning of the project to ensure the optimal workforce preparation.
The Tiger HS640 treats the waste by separating a part of the organic matter and the other dry and light fraction (plastic, wood, cardboard, metals ...) by treating more than 70% of the incoming waste. Output the organic presents a percentage of average less than 1% inert working at a rate of 6/7 t / h.
With a weight of 10 t the Tiger is a robust machine with a small footprint, the operation is simple and management is also facilitated to the fact that all the parts in contact with the waste being constructed in steel and therefore protected against corrosion.